We pulled up to Jones Beach on a blazing summer day before the 4th of July. There was already a decent crowd there early to tailgate and tan. Shakedown was buzzing but something was missing – no smell of onions in the air. Or anything else, as the vendors had all been shut down by the Health Department. Hungry kids kept asking if they could buy a burrito, but people had to say no, due to the $1,500 fines if they were caught. Food was being given away to friends so it would not go to waste before the show.

I saw a table of beautiful glass cake globes that were empty and wandered over to meet Absolutely Sweet Marie. She couldn’t have her cupcakes on display, but gorgeous hand drawn signs described her confections:

Did I mention these were all 100% VEGAN? Marie offered me a couple cakes for research and I have to say as someone who has never really liked cake and a lifelong vegan baked good skeptic – it was a come to Jesus moment. These were hands down the best cupcakes I’ve ever eaten. The gingerbread crust on the Chomsky was a revelation- totally unique, elegant, and added another layer of complexity to the cake.

Marie had never tried to sell them before and Jones Beach on the 3rd of July was her cupcake coming out party. Her boyfriend was a big Phish fan and had been encouraging her to share her amazing cakes with people who would naturally love them. Vegan, delicious, infused with booze and covered with glitter- what hippie wouldn’t eat that up!

Sadly cupcake lovers were turned away that day but Marie made some adoring fans and hopefully will become a vendor at festivals in the future. I am planning to go hang out with her in Brooklyn and make some cakes soon, so recipes are forthcoming..

We meandered on through the lot, crestfallen that there would be no food vending at Jones Beach. A girl was chilling with some friends making awesome looking veggie burritos. Kids continually came up to her, asking to buy one before the show, but she had to turn them down. “It’s a bummer we can’t sell food today, but I do this really because I love to cook for my friends so it’s ok,” she said, handing them out to her crew. I asked about the huge pan of colorful rice she was scooping into tortillas with spinach and salsa – she said it’s her magic touch. The problem with most burritos is that they are filled with bland rice and beans. By tossing this rice with lots of lime juice, green onions, cilantro, fresh corn, and (the kicker) ancho garlic salt, you have loads of fresh flavor and a healthy snack that isn’t heavy. The other problem with festival burritos and burritos in general – it feels like eating a brick. These were everything you want in festival food: satisfying, and something that will keep you going. We talked about hot sauce possibilities and she agreed with my suggestion to buy a huge bottle of Sriracha- not only for taste, but as a marketing lure. Who can resist the sirens call of sweet, garlicky chili sauce.. 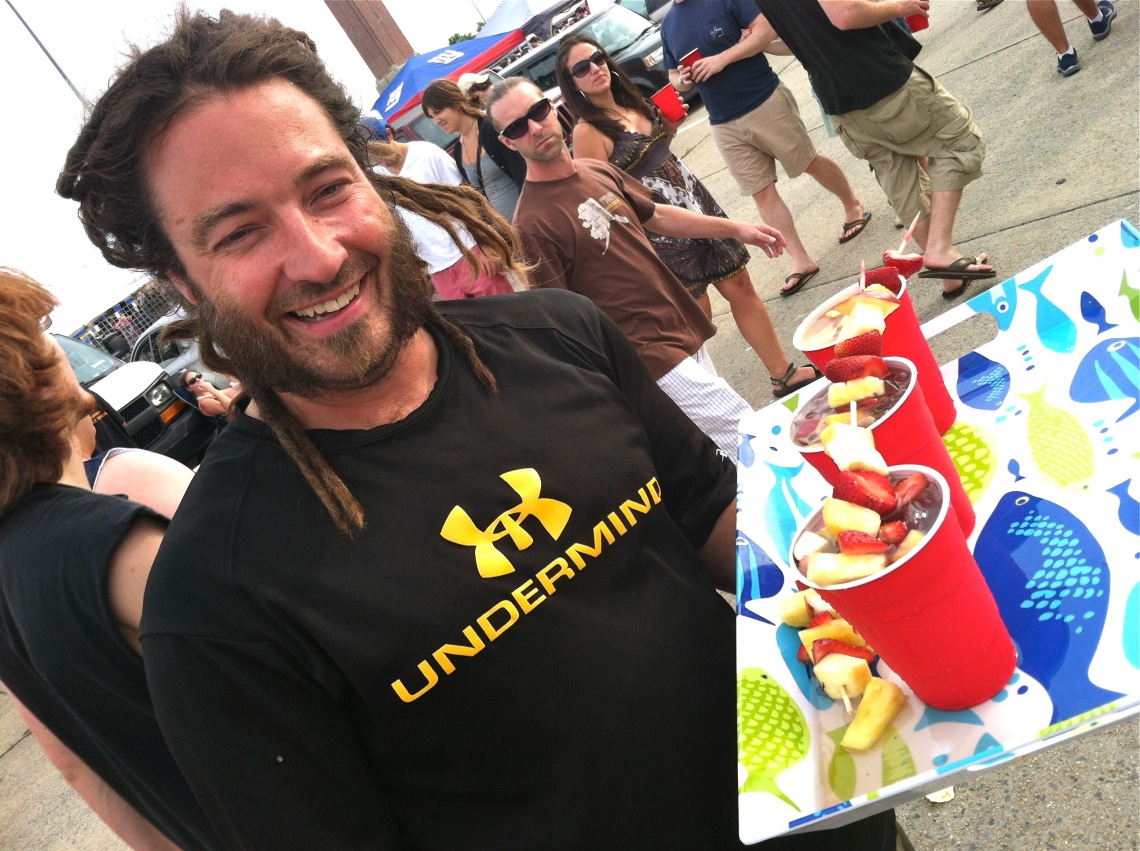 There were also a couple killer cocktails on lot at Jones Beach and a cold, fruity, boozy drink on a hot summers day is the best. One dude had what he called “Beach Front Property” consisting of 2 shots vodka, half a shot rum, blue Hawaiian punch and a skewer of pineapple and strawberries. It was deceptively strong – of course blue koolaid is a pretty intense flavor but it did balance out the vodka and rum. The show pro tip here is combining alcohols for a cocktail that packs a punch. You could certainly use cranberry, or pineapple juice. The fruit skewer soaked up the alcohol and polishing off crispy chunks was a tipsy treat.

Lot drinks usually go for $6, which seems fair – of course craft beers are one for $3, two for $5. You will find some of the best selection of beer being consumed on lot every show all summer, everywhere in the country, guaranteed. Lovers of good live music have great taste in most things, what can I say.

Evan had traveled from Seattle to the shows and had the ultimate 4th of July cocktail – a watermelon margarita. The recipe is: 1.5 shots tequila blanco, agave, lime juice, a dash of sugar, and watermelon agua fresca, the Mexican refresher. He chopped up chunks of watermelon and dropped them into each glass with ice. Hit the spot!

On the 4th the Heath Department was being very strict before the show and alas there was no food to be sold to hunger show goers. But lots of people had brought food to grill out knowing the pickings might be slim from the night before. The concert was fantastic and a personal highlight was being presented with a small Curious George stuffed animal during Fishman’s rendition of Purple Rain. George is now my show monkey and will be joining all future festival travels. We left the show totally ravenous and praying there would be something to eat outside – the night before I broke down and had Dunkin Donuts in some godforsaken part of Long Island where we were staying, as that was the only option.

Shakedown was buzzing and apparently the Health Department had gone home, as there were some vendors cooking.  Never take the first thing you see when you walk into the lot – its almost always some gross meat being grilled that smells way better than it tastes and lures in kids who are beyond the point of making good decisions. If you still have your wits about you, take a lap of the lot like a pro and spend that $5 wisely.

My friend said, “I see Bubba! We’re not going anywhere else.” He lead me over to Bubba’s Chicken, a man I had heard of from last summer at Phish somewhere in the south. This guy was the quintessential lot festy food vendor – an old school hippie who was definitely just in it to make a buck, but obviously loved to eat (he is literally enormous) and was cooking up the real deal. His signature dish is basically a chicken sloppy joe slathered in barbeque sauce and it is absolutely delicious. Hot, juicy, sweet and salty packed up in foil, it’s everything you want in a post show sandwich and what could be more appropriately American.

Working in kitchens for years you get to know cooks and their crazy personalities – some people love the limelight and others just want to put out a meal and be left in peace. Bubba is the later and has neither email nor cell phone, he merely says “Just find me wherever the show is, I’ll be there. If you’re eating pulled chicken from a 300 lb guy named Bubba, you’re in the right place.”

The 4th of July run at Jones Beach was an extremely special musical gathering. As always, on our country’s Independence Day, a Phish show feels like the state of the nation. If you’re a young American, that’s one hell of a party to attend. There’s nowhere else I would rather celebrate what all of us are there to feel: Freedom.