It was my boyfriend Pic’s 100th show! I prayed for BBQ… We rolled into Charlotte, North Carolina and the anticipation was killing me. The night before in Atlanta had been fun but rocky – super sold out and almost no fest food. Thank god the Gouda boys had saved the day with a cheese sauce slathered sub of beef and macaroni. I had hoped there would be some special Southern lot food and was out of luck, so expectations were high for Charlotte. 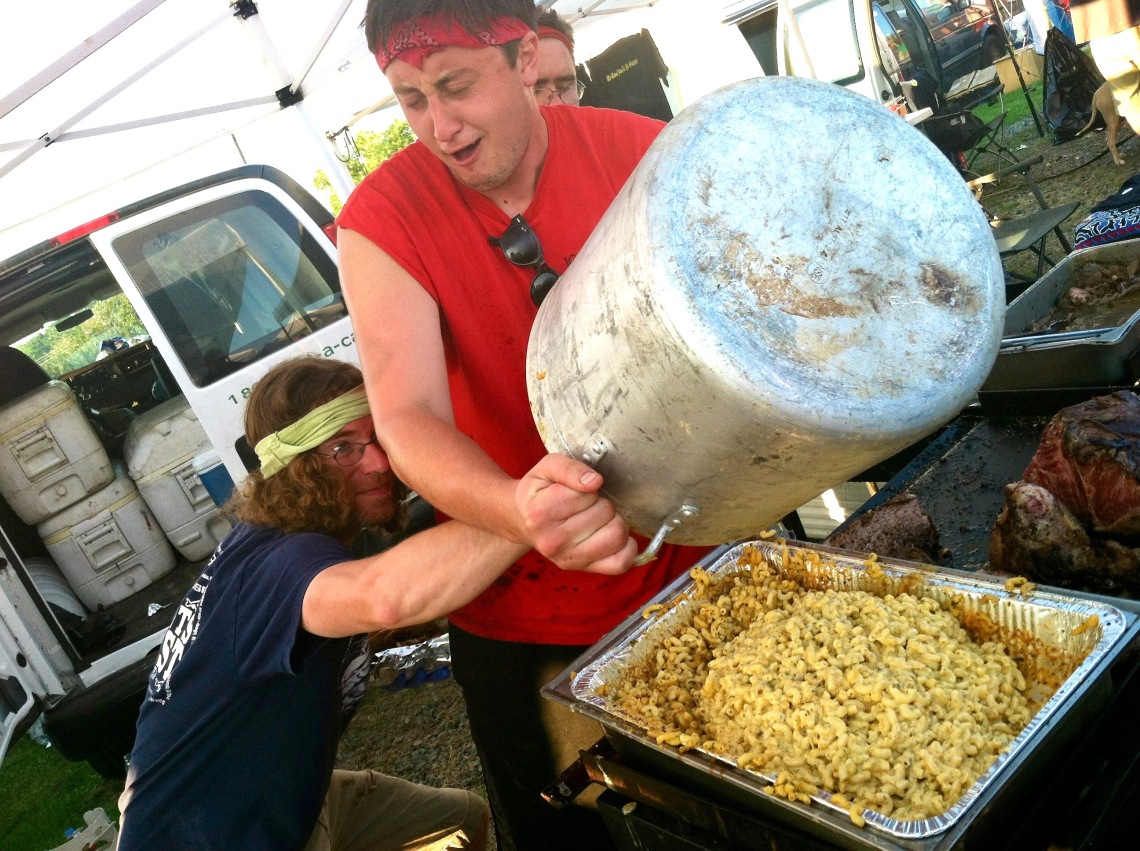 There wasn’t much time to hang out before the show, so I immediately raced through Shakedown. Initially, it looked like nothing special and my heart sank. The same gross chicken or steak “quesadillas” are at shows everywhere – the meat is often questionable and it’s not to be enjoyed, really just scarfed down.  You can always find something better!

Then I spotted a gorgeous girl in a white bikini selling something out of red Chinese takeout boxes.. and I realized she had been at Portsmouth, Virgina the night of the Great Asian Noodle-Off – a night where there were two delicious and totally different veggie noodle dishes on lot. A year later she was engaged and the money from vending at Phish shows was going toward a beautiful wedding on her family farm. Her noodles were perfect for a hot Southern evening – cold with sesame oil, black sesame seeds and cucumber.

It was time to head into the show, but I saw a tent with a flag at the end of the lot and wandered off. It was a Venezuelan flag and a group of guys was cooking up arepas from scratch. They mixed up a cornmeal batter, fried the dough into round flatbreads, and stuffed it with delicious fillings. There was steak and a huge basked of crispy, golden plantains, which was combined with black beans and avocado for the vegan arepas.

The best part was in a bottle on the table –  cilantro sauce. It was basically a chimichurri (herbs and oil) to slather all over your arepa. I got one of everything and only had time to say a quick hello to the owner Jason as we were running late to the concert.

The show was fantastic – a perfect 100th for Pic. Funky Bitch, Alumni Blues, and McGrupp were amazing. There was also an absolutely beautiful print for that night with a woman riding a chariot. I was so happy to have met such nice guys who were putting so much love into their food. A few weeks later I got the chance to hear their story:

Jason was living in Ohio and when he met a woman named Airman online who lived in North Carolina. He was taken with her love of music and her Venezuelan culture. They both got in the car and met in West Virginia for the weekend, staying in a cabin. It was true love and they were married within the year.

Every year Jason’s father in law comes to visit from Venezuela and makes the famous cilantro sauce: clantro, olive oil, cumin, garlic, and little red wine. Jason had traveled to Venezula the previous year and found himself so at home in the culture and the food. Airam’s had just started a business and it inspired him to do the same – which became Carolina Arepas.  Everyone in their neighborhood came for a big backyard cookout in Charlotte to test the different arepas recipes and loved them. Venezuelans eat arepas in the way that Mexicans have tortillas with every meal. Which is why it is the ideal fest food with endless handheld varieties.

One of their first events was called Drum Strong, a two day drum circle that raised money for Cancer, giving 20% of the profits to the cause. George Porter was there and had an arepa – he loved it!

Jason got a new job this year, but is planning to cook at festivals this summer including Delfest. I had sent him a coleslaw recipe to go with tacos and just heard the other day that he was making it with pork. He also sent a video of his father in law making the cilantro sauce! Which is apparently called “gausaca”.

This is why I love food so much – it brings everyone together. Jason and Airam pour their hearts into these arepas and it makes so many people happy.