Colorado is Middle Earth in the mind’s eye of any hippie at heart. The Promised Land of the great American West, fulfilling all fantasies of fairy-tale mountains, vegetarian options, live music, microbreweries and legalized marijuana.

Expectations for my first trip there were high, especially in the food department. I envisioned Denver and Boulder to have incredible natural beauty, which they did… along with skyscrapers and sprawling suburbs. It was awesome, but not the overly crunchy culture I expected.

Arriving at the show the first night, I realized that the Colorado of my dreams was culminating in this one parking lot. It was hands down, above and beyond, far and away the best fest food scene and Shakedown overall I’ve ever witnessed. Thank God I had three nights to eat my way through.

We were running late and I tore myself away to not miss the opener. Once inside, my girl Becky appeared with a bag full of hot, soft, crisp mini donuts lightly dusted in cinnamon sugar. This was quite possibly the only tasty thing I’d ever eaten in a major corporate venue. If those puppies are there again this year, I highly recommend them.

Night two I had my game face on and came early, ready to eat. First I dropped off cans of chickpeas and black beans at the Conscience Alliance food drive. This nonprofit collects food donations at concerts and festivals, distributing them to pantries across the country and economically isolated Native American reservations. They are back this year, so please bring low sodium, organic donations to the show.

It was time for a beer and I couldn’t believe my eyes – someone brought Spotted Cow all the way from Milwaukee to Denver! This one is a rare treat if you do not live in Wisconsin. The guy selling them said he had a full cow costume he was going don at seatbreak and freak out his friends.

The first thing I had on Shakedown is something that I can literally eat a million of: dumplings. Two girls sold them from a rickshaw they converted with a bike and drove around Denver. These potstickers hit the spot, crispy and steaming. 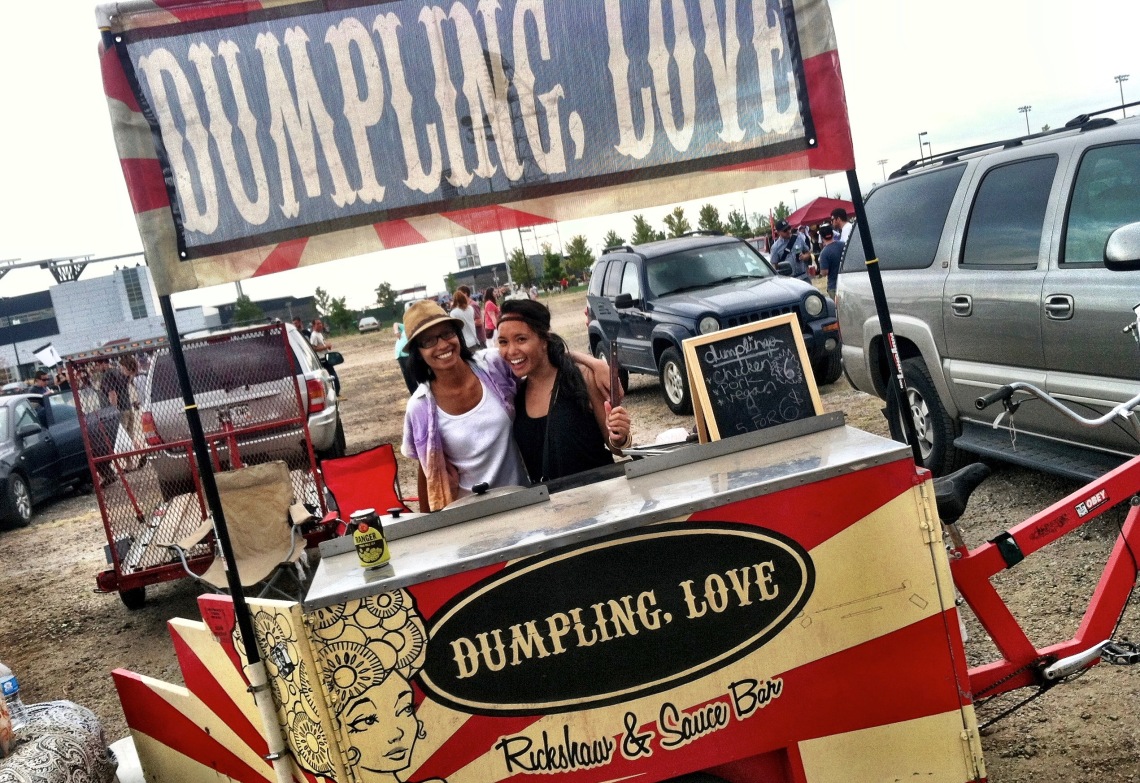 A sign read “Lard Ass Pies” with a gorgeous array below– peach, apple, and berry. The proud baker’s pasty dough was made with fat from her neighbor’s pigs, hence the name. You can’t make this shit up.

It goes without saying that you are a pig in shit on Phish tour if you love craft beer. Denver took this above and beyond my wildest dreams. Everywhere you turned there were kids selling two- for -$5 of better selections than most beer bars; one cooler contained cans of Sierra Nevada, Ska, Avery, Upslope, Dry Dock, and Uinta brewing companies. Nothing could compete with a couple of kids who had a speakeasy in Boulder to sell their homebrew. They brought quite the selection to the show including two IPAs, a rye and an apple saison, an English pale and a wheat.Each beer was labeled with colorful, hand drawn illustrations, complete with style description and ABV listed. The beers were fantastic, hats off to those guys!

The last night in Denver I was hoping for a special Sunday supper. We passed McDevitt Taco Supply hustling hand over fist. Their menu listed specials for every day of the week including Thai Ginger Tilapia, Chocopotle Beef, and honey chili shrimp. Saturday read “Probably nothing” and Sunday “You’re kind of lucky we’re here.”

Something smelled delicious and I followed my nose to a giant pot bubbling with gumbo. The chef was Brian, a guy from Iowa who had owned a Cajun restaurant in Atlanta before moving to Colorado. He made the roux at home and cooked each batch from scratch at the shows. This gumbo was like rich, velvet gravy with Serrano peppers, chicken, and Andouille sausage over brown rice, topped with green onions. This was serious soul food – exactly what I had been praying for! Brian had also made his own ice cream using local fruit. He whipped up tart batches of peach, blackberry, raspberry and cinnamon. This meal was truly heavenly.

A giant zucchini sat on the WaterWheel table, inviting you to guess the weight. That night they were hosting Growing Gardens, a nonprofit that builds community through urban agriculture in Boulder. It was wonderful to hear from the WaterWheel crew that the Conscious Alliance food drive had been a huge success all weekend!

Where else but at Phish would all my magical Colorado fantasies come true? These were the best shows of the summer and an incredible final celebration of the season. Back home in Boston a few weeks later I got the Corgi puppy of my dreams and gave him the perfect name: Gumbo.